Autumn is my favorite season. My Travel Lust during this period turns on high. The temperature changes,  some of the trees start changing color and beautiful harvest fruits and greens come in abundance.

While walking one late afternoon, after a huge rain fall, I was stopped in my tracks looking at the ground filled with colored leaves.  This is such a welcome sight!

Soon I’m off for a quick visit back to China again for the second time in 2 months!

See you when I get back.

Shanghai in the last decade has quickly become a huge mega city filled with incredible modern buildings and large scale shopping malls along with renovated glitzy 1920s buildings. It felt like the roaring Shanghai of the old, where the incredible rich gather in this mega playground. I had the chance to live like the rich, staying at a nice huge swanky apartment, and dined at a few swanky restaurants. It was a superficial look at Shanghai, but boy it was fun.

END_OF_DOCUMENT_TOKEN_TO_BE_REPLACED 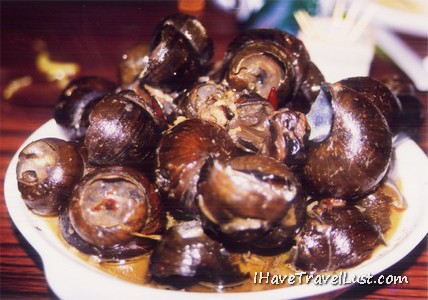 My Autumn favorite of yummy pepper corn chili snail stew!  A very popular dish in Shanghai during this time of the year where the weather is getting cold.

END_OF_DOCUMENT_TOKEN_TO_BE_REPLACED

Food in East China : All manner of Dumplings

I must admit, I hate dumplings, not fond of them at all.

END_OF_DOCUMENT_TOKEN_TO_BE_REPLACED

Posted in 3. Food Around the World, China 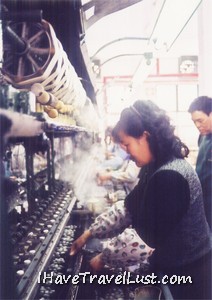 As China progresses, the inevitable happens to its ancient crafts. Here in Zhejiang Province , old towns producing traditional crafted silk are fast dying off or have turned into a tourist circus attraction. Zhejiant is where the art of Silk crafting is invented. These old towns grow the mulberry orchards, tender to the delicate mulberry silk worms, painstakingly harvesting silk from these worms in community factories.  The most famous are the Jili silk factories which have probably died by the time you write this.

END_OF_DOCUMENT_TOKEN_TO_BE_REPLACED

For you gourmets out there, When you talk about Ham, you would either regard the hipsters choice of Spanish Iberian Ham or Italian Culatello  Prosciutto. Surprising to the rest of you Hipsters, I bet you don’t know China has its version of great Prosciutto.

END_OF_DOCUMENT_TOKEN_TO_BE_REPLACED

Posted in 3. Food Around the World, China