Spending the New Year Celebrations in Ecuador is highly recommended and it had been quite a fun experience.

In Quito, Ecuador, the Quitenos celebrate their New Year’s Eve slightly different than the rest of the Andean countries. Around the late afternoon, the Quitenos would dress up in halloween costumes, the more frightful the better.

Families in costumes parade around the Avenue de Amazonas, often in costumes that are more suited to halloween.There were many celebrations going on with music stages all set up in the main street with huge dolls.

Events end early in Quito, the crowd would thin out quickly by 10pm, families would return to their barrio for their own family celebrations.

I got to visit a Quiteno family and participated in their celebrations, we did the rituals for the New year, danced, cried, read out our hopes and desires, burnt effigies, set off fireworks, then finally got to eat our new year dinner after 1am and continued until dawn broke.

In the neighbourhood, the young men or sometimes older men would dress up as ‘Viudo de Negro,’ Black widows. Blocking off their streets to hapless drivers begging and harassing for money. It can be quite a campy sight, where the males would dress and act in quite raunchy, exaggerated depictions of women. 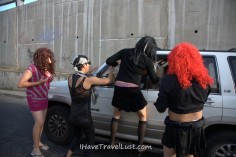 Rituals and Traditions of the New Year

One of the traditions or rituals is to burn an effigy of a person in form of a masked dummy, the effigy is usually a person that you despise or someone you wish to get rid off in the new year.

At midnight, the effigy is burned, to symbolise the burning of the old year, aka Ano Viejo, and to usher the New year. Each person in the family would jump across the burning effigy to burn away their bad luck. It is also a custom to write your wishes and hopes out and speak it out as you burn the effigy.

It gets quite busy at midnight,

You are suppose to eat 12 grapes to symbolise your desires and protect you for each 12 months of the year.

Wear new underwear :  yellow for money, or red for love.

Sweep the dirt away in the front of your house twelve times.

For those wishing to get married  in the new year, you have to sit and stand 12 times in a row at the stroke of midnight

Carry 13 golden coins for prosperity all night during dinner.

Read out your will, or desires and hopes for the coming New Year.

Then Finally eat your New Year’s dinner after everything is done!