Think the Vegetarian Festival in Thailand is a benign occasion where meek vegetarians run around promoting eating vegetables and no killing of animals?

Here in Phuket, Thailand where 30% of Thais are of Chinese origin, they take this unique festival so seriously that most of the worshippers pierce parts of their bodies with elaborate objects that involve guns, ladders, wheels and other household objects .

Vegetarian Festival also known as the Nine Emperor Gods Festival. It’s the Chinese Taoist version of Lent and quite similar to the Indian festival of Thaipusam.

How this got started was vaguely explained to me .

A whole Chinese opera troupe had mysteriously fallen ill, and one of the members had a dream that they should all pray to the Nine Emperor Gods for good health and observe the vegetarian diet for nine days. In honor of  the Gods, they conduct rituals and performances like fire walking, and fire crackers and bladed ladder performances. To this day, the Chinese of Phuket observe the same vegetarian diet for nine days and conduct themselves with the seven laws of abstinence that include no sexual conduct and no killing of animals. 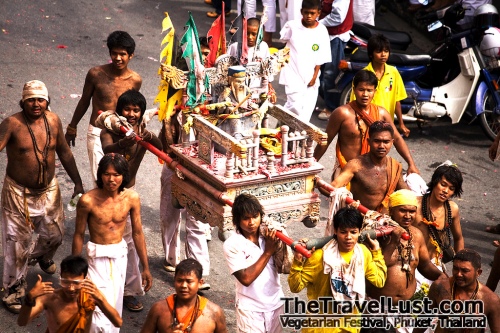 The god statue is carried by the devotees who are all dressed in white from the temple to the sea.

The participants are said to be chosen by the Gods and become possessed with the spirits of the Gods. Immune to the pain inflicted by their gruesome piercings they would gather in the various main temples and proceed with a day long street processions. These trance-out mediums give out on-look devotees with sweets, fruits and other blessed colorful string tailsman. By the end of each processions I  received so many of these string tailsmans, they were as thick as my wrist. 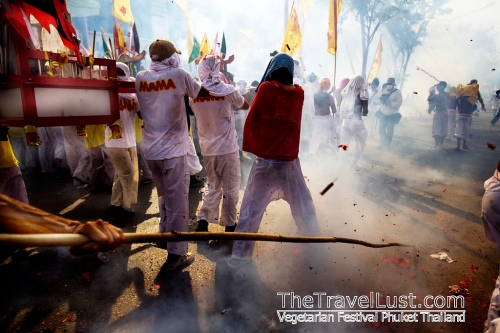 Firecrackers going off at the end of the processions, these are sponsored by the various businesses along the streets to welcome the Gods.

About the Phuket Vegetarian Festival

It is held annually in October, the dates changes according to the Chinese Lunar month. The festival lasts nine days and is so popular with the Thais from all over that Phuket town gets crowded so its ideal to book your accomodation in advance.  There are nightly rituals in various temples, good to check the dates and timings with the organisers in the main temple at Chinatown for more recent updates. 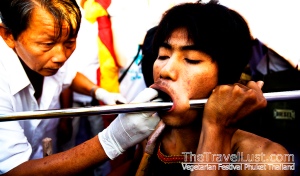 Piercings are held in the temples after the devotee gets possessed by the Gods. Well organised, there are piercing stations that conduct these in hygenic fashion. All the implements are sterilised before they are pierced through the cheeks.

2 responses to “Vegetarian Festival like you never seen before”