There are more humans in the cemetery at night

Taoist Mediums at the celebrations

Hungry Ghost Festival in Singapore is one of my favorite month of the year. The month long celebration of when all hell breaks loose, releasing all the spirits out onto earth to run amok with the blessing of the gods …

You think Singapore is a little boring and stagnant devoid of any cultural traditions, try visiting this country during the Chinese seventh month (in August), the suburbs come alive with these celebrations for the dead ranging from medium possession rituals to chinese operas and ‘getais’ – concerts for the dead. Where in the world would the cemetery come alive at night with more humans but here in Singapore.

Nothing beats visiting the Chua Choo Kang Chinese Cemetery at 11pm at night and finding tons of people gathering at different spots around this  suddenly rather busy cemetery. The cemetery is ablazed with joss sticks, bonfires and filled with Taoist mediums, along with their entourages in bus coaches and blue neon lighted trucks.  (the blue neon represents the underworld, while anything red in color represents the heavens)

Many Taoist societies (mainly societies who worship hell gods or protector gods of the chinese version of hell) would organise these hungry ghost celebrations by visiting their dead loved ones and flooding them with offerings of food, joss sticks, paper effigies of houses, clothes, money while lighting up their tombs with candles.

It was a beautiful sight where you could see parts of the cemetery covered with lighted candles or joss sticks, the whole area didn’t feel creepy at all.  The pathways are alight with lines of joss sticks and candles. Not exactly what you expect in a Chinese cemetery if you were looking for the supernatural.

I arrived a little late, and only got to catch one major big celebration, there were a few other smaller groups but it was not as exciting nor fascinating  as this event. The cemetery was not as crowded with celebrations compared to the previous years, perhaps a sign that our Singapore economy is improving and we didn’t need to resort to asking our beloved dead ones for better life and money?

This one group I came across was a strange mish mash of religions, this society has two concurrent rituals, a group of China buddhist monks chanting to relieve the dead of its karmas and a group of Chinese Taoist mediums where society members could ask questions from the spirits through these mediums. The mediums would advise how the rituals be done via the medium interpreter and point the followers on when and how things should be placed in the altars for the dead.

The Taoist side had a huge effigy of chinese palace for the houseless spirits along with paper effigies of money and other consumer goods that the wandering spirits would appreciate. The buddhist side of things had the participants offering their beloved dead ones traditional looking Chinese property chest filled with money and clothes.

When I was young, my grandma and I would often fold and create beautiful colorful representations of clothes, gold, silver bullion to offer our deceased ancestors and we burn these in red bins out in the open along with special food like roasted duck and pork and wine both for our ancestors and for the wandering spirits. A ritual we both did during the first, 15th and the last day of the month.

The traditional chinese property chest is more of a modern invention and more convenient way of storing all the gifts for the deceased. I only saw these chests in the recent decade. These modern paper effigies and rituals have become more commercialised and much larger and bigger and of course much more elaborate compared to when I was a kid.

Scattered around this flat clearing in the cemetery were joss sticks and more offerings of coins and food for the lost wandering spirits that might be hovering around looking for food. We humans got offered tasty fruits and praying cakes made from rice flour and brown sugar for good luck and blessings from the protector gods.

Towards the end of the rituals, both the buddhist and the Taoist side begin to gather all its members, circling around the bonfire offerings three times, while chanting. This is one of the typical rituals of paying respect to the dead while offering the deceased comfort and helping to relieve their karmas.

In the short span after, the members begin tossing paper money around, chanting “Huat ah” (prosperity in hokkien), throwing in all the food offerings and joss sticks,  lighting up paper effigies. The bonfire grew larger very quickly and you could feel the heat with the fire engulfing all the effigies.

A sight to behold!

The Hungry Ghost Festival occurs during the 7th month of the Chinese Lunar Calendar mainly occurs during July or August. (It happen to be in August this 2010).  The Chinese pays respect to all the dead, relatives and other dead lost wandering spirits. Along with the Buddhist festival of Ullambana, this tradition mixes Taoist and Buddhists beliefs. It is believed that this time of the month, hell opens its gates and releases the dead to revisit earth. The living would conduct ritualistic offerings to help the dead relief themselves of their unfulfilled desires and resolve any of their suffering, hence the word, Hungry ghosts.

Well that’s my belief for this festival, you might view it differently.

The altars with offerings mainly protector gods as statues

With buddhist or Taoist influence, offerings varies from fruits, vegetarian to meat offerings. It all depends on what the mediums advises.

The boxes are the paper effigies of chinese chest which contains clothes, money and other consumer goods that the dead may use. Each chest are labelled with the name of the deceased. Unnamed belongings or separate pieces are for the lost spirits with no family. 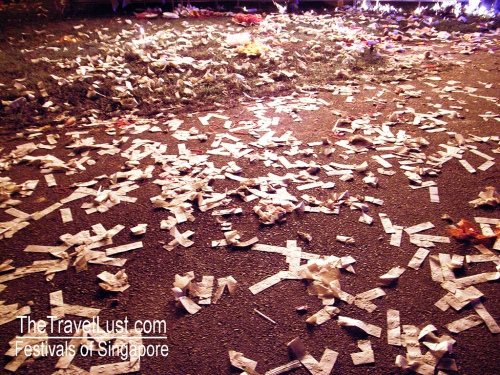 Mantras written paper offerings to relieve the dead from their karmas

The Taoist medium sits on these chairs, mainly for the possessed medium, the chair represents the protector gods, or Taoist ‘hell’ gods. 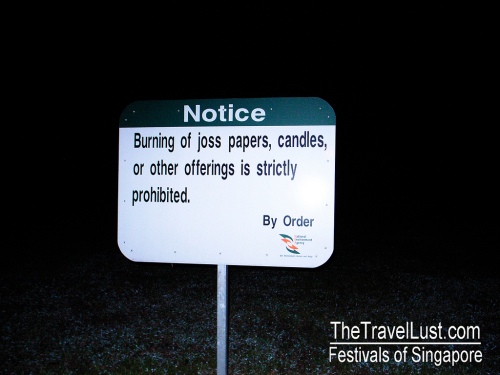